This copy was a project of Kerstin Schwarz and Tony Chinnery and was built in the years 2002/ 2003 for the Department of Musical Instruments at the Galleria dell'Accademia in Florence. 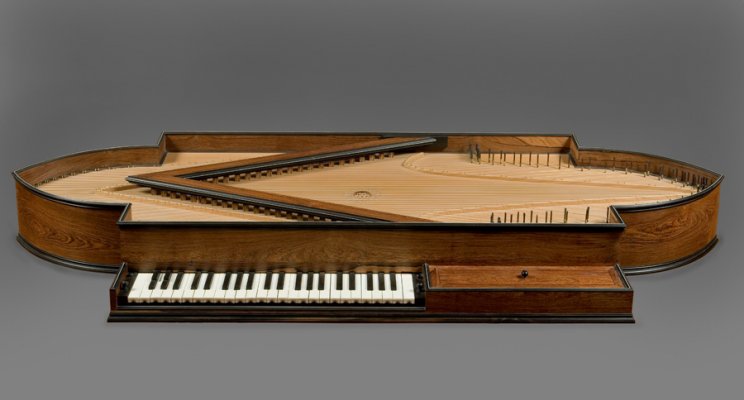 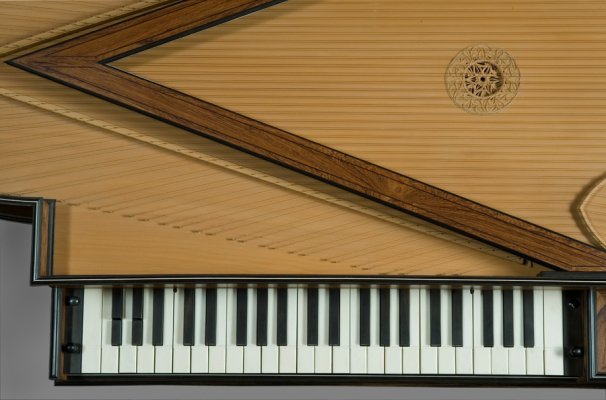 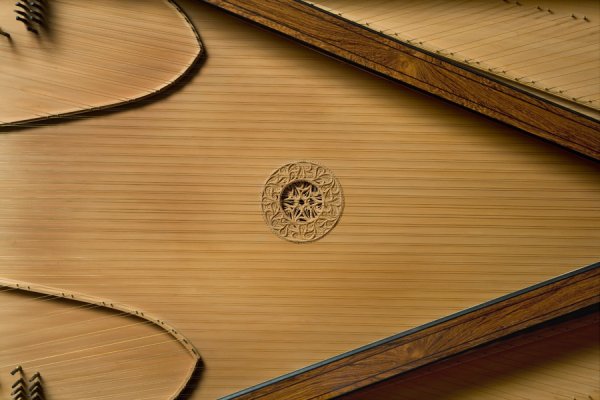 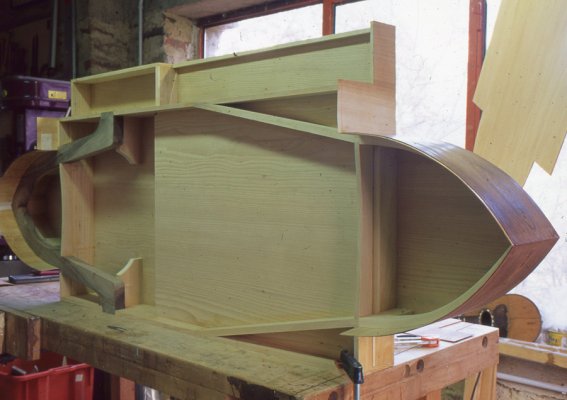 Description of the instrument

The 1690 oval spinet is a striking instrument for its form, for the rare rosewood of the case, and for its technical innovation. It is the earliest surviving testimony to the inventive genius of the man who would go on to invent the pianoforte. Cristofori built two of these oval spinets, both for Prince Ferdinando. Both spinets are described in the inventory of the musical instruments of Ferdinando de’Medici dated 1700, and for both we have Cristofori’s original bills in the Medici archives. We thus know that for the 1690 spinet Cristofori calculated ten month’s salary for a worker, that he had further help from a cabinet maker, and that having calculated the sum of the expenses for work and materials he then doubles it as the final bill: “mia fattura”.

Whilst the 1693 oval spinet was well known from the beginning of the 20th century (it is now in the Grassi-Museum in Leipzig), that of 1690 had been considered lost, and nobody could have foreseen its discovery in the year 2000. It was identified amongst the objects comprising the inheritance of the art dealer Stefano Bardini (1836 - 1922). This inheritance had been left to the Italian state according to the terms of the will left by the last inheritor of Stefano Bardini, but it has taken 30 years to resolve legal problems and bring about the final transfer of ownership.

Since 2001 the 1690 oval spinet is on display in the new musical instrument museum in the Galleria dell’Accademia in Florence. This gallery comprises those musical instruments remaining from Prince Ferdinando’s collection that have not been dispersed over the years, so the oval spinet was a welcome addition, being the earliest dated instrument by Florence’s most celebrated builder. At first sight the 1690 oval spinet seems in a far worse state than the 1693 instrument, missing some components such as the jackrail and the upper case mouldings. However a detailed examination revealed that unlike the 1693 spinet, the earlier instrument has not undergone any significant alteration or rebuilding since it left Cristofori’s hands, and is therefore a precious source for organological study. The decision was taken to carry out only minor conservative work on the original instrument, but to build a working copy to illustrate the potential of Cristofori’s ideas, following a series of detailed studies of the original instrument.

In his oval spinets Cristofori succeeded in combining the advantages of the harpsichord - long bass strings and two eight-foot registers - with the compactness of the spinet, creating an aesthetically elegant and attractive instrument.

The bass strings are in the centre of the soundboard, going up the scale the strings alternate progressively between the front and back of the instrument. This string layout requires a keyboard whose key levers alternately become progressively longer and progressively shorter as we go up the keyboard.

Unlike a conventional spinet with one eight-foot register, Cristofori’s oval spinets have two eight-foot registers. The selection or coupling of the registers is brought about by sliding the keyboard backwards or forwards to predetermined blocked positions. There is a complicated system of cutouts and raised portions in the key levers that determine if a jack is brought into play in each position.

The 1690 oval spinet is made from Madagascan rosewood with ebony mouldings. The soundboard is in cypress and the keyboard is in ivory with ebony accidentals. The range is four octaves C–c3 with a short octave bass (the old system in which the bottom note seems to be an E but is tuned down to C, then the bottom F# and G# keys are tuned to D and E). However the first two accidentals of this instrument are divided in two to provide the instrument with the low F# and G#. With these two spinets Bartolomeo Cristofori managed to extend the musical potential of what had become to be seen as very limited type of instrument.

In 2012 the spinet was the subject of a detailed conservation project. For information and photos see Restoration

For more information about the CD (see Discography).