A Clavecin Roïal is a large German square piano with a compass of five octaves (typically FF to g3). The instrument has an escapement action of the Stoßmechanik type, but it works differently from the better known English hammer action. It was built in large numbers until c1796 and is important for the historical performance practice of the late eighteenth century. Like Johann Zumpe’s English square piano, the instrument plays a major role in the history of the piano.

The sound is generated by bare wooden hammer heads of triangular in cross-section. The strings are only damped when using a knee lever to engage the dampers. With a second knee lever, a so called ‘harp register’ (a frame with cloth fringes on its front site which can be lowered onto to the strings) can be engaged. With a third knee lever, small pieces of leather can be moved between the strings and the hammer. This register is called the ‘moderator’. There is also a swell, an internal cover made of cardboard covered with silk which sits above the soundboard and opens to give a crescendo effect or sudden fortissimo, similar to the Venetian swell.

The surviving examples (not more than around 18 in the whole world) are all of extremely fine workmanship. Most of them have unusual veneers with beautiful inlay work, the surface polished and decorated with smart brass hinges. Almost none of them is in playing condition.

The instrument was given the name Clavecin Roïal by the Dresden builder Johann Gottlob Wagner (1741–1789). He worked together with his younger brother Christian Salomon (1754–c1800), who continued the business after Johann Gottlob's death. Wagner published a description of the instrument in 1775, and this was printed four years later in Johann Nicolaus Forkel’s Musikalisch-kritischer Bibliothek:

Already in the year 1775 an organ and instrument maker from Dresden, Mr. Wagner, has through an announcement described a new kind of Clavecin (harpsichord) which he invented and which he named on advice of a great composer and musician Clavecin roïal. The whole construction will be understood best with his own description; we reproduce it here literally.

Already last year a newly invented musical instrument, which one of the greatest living musicians [C. P. E. Bach?] gave the name Clavecin Roïal, was announced by the person mentioned before[…]. Instead of the plectra's or the brass tangents in this new instrument the notes sound in the various registers thanks to wooden hammers […]. If he [musician] is good in improvisation, rich in imagination and knows how to use the the long sound of the bass artfully, will be able to play the most pleasant harmonies there are to be heard.

Although Wagner claims to be the inventor of the instrument, this is by no means certain. From C.P.E. Bach’s inventory we know that he owned a Clavecin Roïal from the then famous instrument maker Friederici from Gera, of whom unfortunately no Clavecin Roïal has survived. In addition, a Clavecin Roïal made by Johann Gottlob Horn in 1786 is preserved in the Kunstgewerbemuseum of Schloss Pillnitz near Dresden, and there are a few other undated and unsigned instruments as well.

Since none of the surviving Clavecin Roïals are in original condition, research on various instruments was necessary. This included a detailed investigation of a Clavecin Roïal made by Johann Gottlob Wagner in 1788 and preserved in the Musikinstrumenten-Museum in Berlin. Thanks to the support of the Director Conny Restle and to the restorer Sabine Hoffmann, it was possible to dismantle, to photograph and to measure the very complex hammer mechanism of this instrument. This particular Clavecin Roïal is one of only a very few with historical gauge numbers and thus provides vital information regards the stringing of these instruments.

Clavecin Roïals have no opening in the belly rail and it is consequently difficult to ascertain their inner construction. For the copy, the internal parts were reconstructed thanks to photos of the restoration of the Wagner Clavecin Roïal carried out in 1974 in Berlin, and of another Wagner Clavecin Roïal restored in 1984 in the Bach-Haus museum in Eisenach. The copy’s soundboard thicknesses were also based on measurements of the Eisenach instrument, the soundboard of which was very damaged and replaced in 1984.

Almost all surviving Clavecin Roïals have veneered cases, but there are a few built in the more traditional Saxon style of clavichord construction, with case sides of oak and visible corner dovetail joints. This is the case of the Clavecin Roïal made by Johann Gottlob Wagner in 1788 and now preserved in the Bach-Haus in Eisenach. This style, which from Wagner’s publication appears to have the ‘basic model’ was chosen for the copy. Since the legs of the Eisenach instrument are not original, the design of these was copied from the Horn Clavecin Roïal preserved in the museum in Pillnitz. Three of the four registers plus the knee levers surviv in original conditions in the Clavecin Roïal in the Berlin museum. The swell mechanism, as well as the music desk, have been copied from the Clavecin Roïal made by Wagner in 1783 and now in the St. Annen-Museum in Lübeck. The sound and the dynamic possibilities of the Clavecin Roïal can reach from loudness as strong as a big harpsichord to intimacy and sweetness like a harp or a lute. When the moderator is engaged, the sound reminds of a romantic piano. The action works well and is very fast, the damper register is extremely efficient.

KERSTIN SCHWARZ, The building of a clavecin royal. The Galpin Society Newsletter no. 55, Autumn 2019
view or download pdf 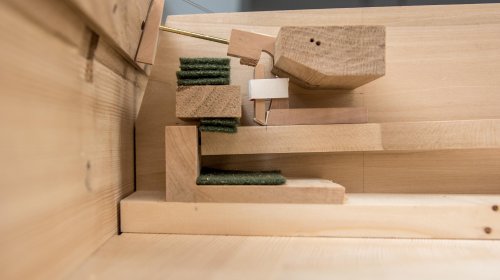 The initiator of the Clavecin Roïal copy is Pablo Gómez Ábalos, a Spanish pianist and musicologist living near Valencia. In 2017 he won the Leonardo Grant for Researchers and Cultural Creators of the BBVA Foundation (Spain) for the project. In 2019 Pablo Gómez Ábalos has made a CD.

you can buy the CD on AMAZON

VIDEOS with sound samples of some registers, Pablo Gómez Ábalos 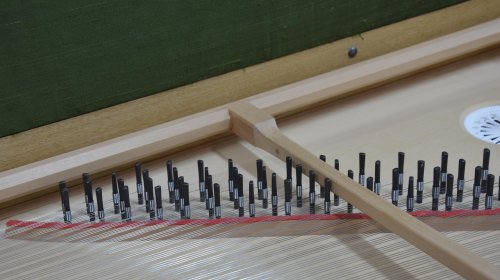 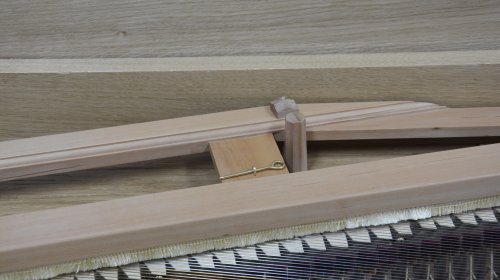 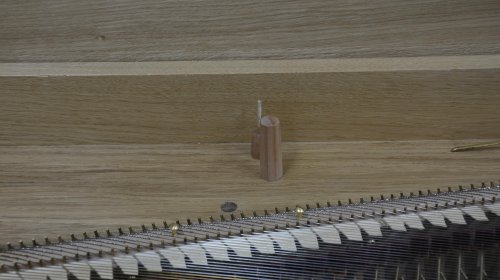 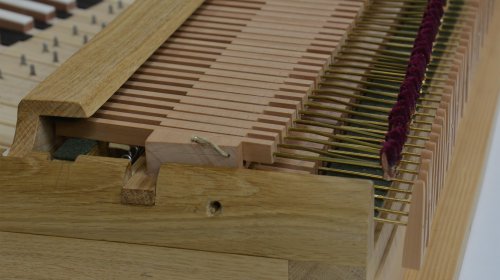